The second part of Sonic Colors Ultimate’s promotional web comic has been released. You can check it out below:

This appears to be the end of this little project. What did you think? Would you like to see more Sonic web comics from SEGA?

It’s been a long time coming, but the next issue of IDW’s Sonic the Hedgehog is finally on the horizon. With less than two weeks until the series’ return, IDW has released preview pages on Apple’s iBooks app. Check them out below!

Credit to @IDWSonicNews for editing and posting these pages!

This week’s page is an example of Sonic Egg’s use of continuity for future gags and jokes. In a previous page, Tails mentioned something about giving the Tornado “sentience”. This wasn’t a throw away gag. He’s really doing it. And you can see him at work below. Also, did I….neglect to mention that no one on this comic particularly cares for Chris?

This comic runs weekly at ECC. You can discuss this comic with long time fans and the creator’s at their forums, where occasional sneak peaks of future pages are given. 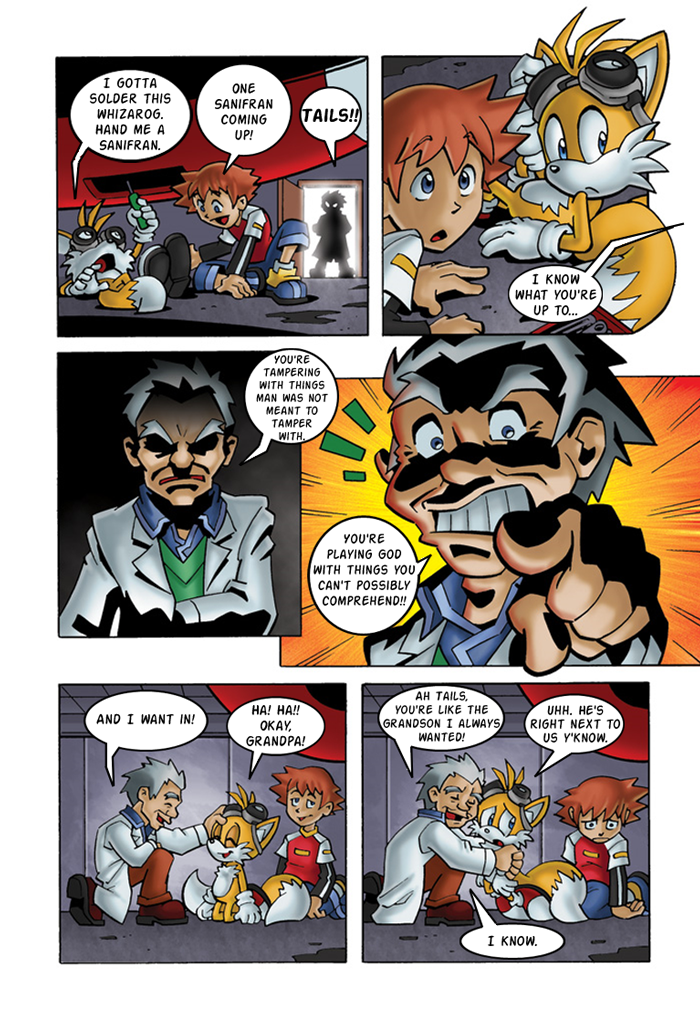 This is something I’ve  been trying to point out for weeks, but it seems like something always comes up to prevent me from posting it. This weekend, I’ve decided to preempt Sonic Eggs for last month’s Not For Resale strip, MGComic’s woefully under-updated and under appreciated Sonic humor strip.

Though their almost always worth the wait, this one in particular! This is a strip many of you may not get at first, but once you do, you are in for quite a laugh. A cookie goes to the first person to get it! One of the things Mr. Hurst pursued for years was a third season for SatAM. In fact, one of the biggest things he disliked about Sonic Underground was the fact that it could have been the finale that SatAM lacked.

Leave it to the fans to take a step to finally realize his vision. Enter: Sonic the Hedgehog Sea3on. Meant to act as a third season for the classic cartoon, Sea3on is a surprisingly awesome fan made comic from the good people of FUS, not to be confused with a similar take on the story that the same website had attempted to realize many years earlier.

The best thing about this comic is that it feels like SatAM. The comic features strong writing and art, and has managed to achieve a constant weekly release since it started last year.  I would like to extend my kudos to the creative team, as I am sure Mr. Hurst would be really happy with what you’ve accomplished. Please keep the comic going in his memory.

This comic is being written by FUS member Gojira007, with art for these first bunch of pages by Salamander.

Now, to start you all off on this comic, I have included the first five pages of the series below. If you want to read the rest, please visit the site here.

Not For Resale is one of the most satirical, most wrong, and yet most right Sonic related things in existence. You remember that colorful, beautiful, wholesome CGI trailer we got for this game? Well, this comic reveals what’s really going on… Now, if only NFR would update a little more often… Those of you who came to Summer of Sonic last year and/or have visited SEGA Memories will recognise this comic strip made by SEGA Memories own Aaron. Aaron had correctly guessed that Sumo Digital staff Steve and Travis would constantly get the question “Why is Sonic in a car?” and so gave them the above comic to answer the annoying query. The comic worked wonders and gave many people a laugh so those who still have this query, take a look at the comic and put your mind to rest. As we approach the home stretch on the road to 200, things are beginning to really heat up! The gauntlet’s been thrown, the pieces are in place, and everyone is now ready for the lead up to the next big confrontation between Sonic and Dr. Robotnik!

This issue is supposed to lead up to something that will drastically change the status quo, and the lives of Sonic and his friends and enemies in the process. Looking at #199, the stage is most definitely set for something like that. Below, as usual, I will post the five preview pages released by Archie, as well as the issue’s official solicitation, and of course, my review.

For those of you not willing to scroll through everything, this is an issue I highly recommend, as it more or less represents the reason why I read these comics in the first place, and why I think all of you other Sonic fans should too.

SONIC THE HEDGEHOG #199
“Knocking on Eggman’s Door”: Sonic leads the combined might of the Freedom Fighters and the Chaotix in a final push against Dr. Robotnik and his Eggman Empire! In this climactic battle old friendships and rivalries are revisited, family confronts family, and a treacherous plot is revealed that you won’t believe! You simply cannot afford to miss this pulse-pounding lead-in to the mega-milestone SONIC #200!
SCRIPT: Ian Flynn
ART: Tracy Yardley!
Shipping Date: April 1st, 2009
On Sale at Comic Specialty Shops: April 8th, 2009
On Sale on Newsstands: April 21st, 2009
32-page, full color comic
$ 2.50 US

This issue was most definitely leagues above the somewhat anticlimatic “Egg Pheonix” story last issue. Featuring the usual amount of nice action scenes, this story also had some nice character to character moments. I won’t go into it, lest I spoil it for people who haven’t picked it up yet, but Ian’s writing is definitely at it’s best when he lets the characters be themselves and interact with each other on a more personal level, not just with their fists. The story touches on past plot points to help show just how important this battle is, and ties this issue in with continuity that is over twelve years old quite nicely.

The art is fantastic, something that has thankfully become the norm ever since Tracy took over and Ron Lim quietly left the book. Tracy’s cartoon style really matches the atmosphere of the book, and Sonic himself. Matt Herm’s coloring is also a nice step above Jensen’s style, which has always been too bright for my taste. I am hoping he will soon become the regular colorist on the book.

Of course, the issue does have it’s share of problems. I would say it’s biggest problem does not lie in the issue itself, but rather it’s build up. Despite the battles in New Megapolis in during the New Moebius arc, this whole “end of the Eggman Empire” plot point still feels rather sudden. Considering this war has been going on since the book’s conception, it seems to me that we needed to have many more issues before it focused squarely on building up to this monumental battle. I enjoyed the Bold New Mobius saga far more then any other storyline Archie’s ever made in the Sonic book, but I think it may have been best to delay or shorten the storyline so that more issues could have focused on building up to this fight. Without a focused build up, this story doesn’t feel nearly as epic as it really should.

Hopefully, with Sonic Universe now allowing Ian to write two issues a month instead of one, Ian can make a more concerted effort to ensure future storylines like this have the right amount of build up, without leaving other plot points and characters hanging for years on end, as he probably should have with Scourge and the Anti-Mobius reinvention.

I highly recommend this issue to Arche fans and Sonic fans alike. This issue isn’t necessarily the best jumping on point for new readers, but with stuff like the pending epic battle between Sonic and Robotnik, a fight between Shadow, E-102 Gamma, and Omega, as well as the formation of team dark and a huge change in the status quo all coming in the next few issues of StH and SU, I can’t imagine a more exciting time to start reading it. The comics themselves contain loads of fan service to Sonic fans, and perfectly show Sonic’s attitude in a way I haven’t seen since the sprite animations in the classic games. Couple that with excellent art and entertaining writing, and I don’t think any Sonic fan has a legitimate reason to not give this comic a chance right now. This comic isn’t about love affairs, teen soap operas, and family drama anymore. This comic is about Sonic.