I just bumped into this and had to share it. Jason Griffith, who most know voiced Sonic in the Sonic X anime in 2003 until Sonic and Sega All-Stars Racing in 2010, actually did indeed still voice Sonic for at least one last time in a half hour Fall 2010 Preview of Toonzai on CW4Kids. You can see the full video below. END_OF_DOCUMENT_TOKEN_TO_BE_REPLACED Some of you may be aware of the Texas based convention SonicCon which we reported on a little while ago. Well, it looks like the event set to take place in Plano next month now has a bumper roster this year, including Dr Eggman voice actor Mike Pollock and ex-Sonic voice actor Jason Griffith. Not only this, ska-punkers Bowling for Soup will be playing the event, fronted by Endless Possibility singer Jaret Reddick. Although there is no confirmation as of yet, attendees may be treated to a live version of the song.

If you’re planning on attending the event next month taking place from November 5-7, do let us know in the comments!

Sega has announced that Jason Griffith will no longer be the voice actor for Sonic the Hedgehog. Roger Craig Smith is confirmed as his replacement. END_OF_DOCUMENT_TOKEN_TO_BE_REPLACED

Jason Griffith could be leaving his post as the voice of Sonic the Hedgehog. That’s the rumour that has hit the Sonic community today, following an admission from the voice actor that he is currently not voicing the blue blur in the upcoming Sonic Colours.

Tipster ‘XD375’ told The Sonic Stadium of the revelation after having made contact with two anonymous sources close to the matter. They both suggested that “a new voice” would be involved in the Sonic franchise going forward. A message from Griffith’s Facebook profile has confirmed his lack of involvement;

Thanks for sending [a video of Sonic Colours]. Not sure who is voicing Sonic, unfortunately, so I can’t really say. Also, we have all signed NDA’s in the past, so I don’t really “speak up” on a lot of things involving SEGA.

The future of the roles of Tails, Knuckles and other lead characters were unknown, but it was revealed that Mike Pollock would continue his work as Dr. Eggman. When contacted by SSMB user ‘Crash’, Pollock declined to comment, adding that “I can’t discuss anything that’s not officially released yet, so please get back to me after [the game] hits the streets.”

Speculation of a change-up of the current Sonic voice-over cast sparked up shortly after ArchAngelUK spoke of an announcement to be made on Thursday, concerning the franchise as a whole. While it would not necessarily affect the games, it was suggested that the news would involve an element of the games to some degree. The subject of voice acting would certainly fit that bill.

The future of Griffith’s tenure as Sonic the Hedgehog is currently unknown. While his response above largely hints at a leave of the character, it is equally likely that this is a one-off – that Sega is undecided whether Sonic should have a full speaking role in Sonic Colours at all. If we get any clarifications regarding this rumour, we will be the first to let you know. 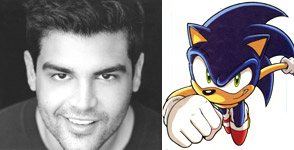 So, I was chillin’ with Mike Pollock, the voice of Dr. Eggman, recently and he told me to invite you guys to a special chat involving him and his voice acting buddy, Jason Griffith.  I hear that he does the voice for Sonic the Hedgehog.

How do you get invited to this chat?  Send an e-mail to this address requesting to join the chat.  The e-mail must include your Yahoo Instant Message or MSN address.  If you are accepted, you will receive a confirmation and a private invite to join the chat at a selected time.

The fun starts at 8 PM EST on Friday, July 31st.  Don’t miss out to finally speak to Jason Griffith!

By the way, if you’re going to the chat to just shit-talk Jason for “not being Ryan Drummond,” please get a life.

Lady and gentlemen, Jason Griffith wears a condom.  You should, too.