2014 has been a significant year in my books; To mark my 30th I’ve been fortunate enough to have also celebrated Sonic the Hedgehog at three different events across three continents with many fellow enthusiasts. 2014 has also been a year in which SEGA has proven it can still put on a show. Sonic Boom (the fan event, now in its 4th year) was yet another fantastic showcase of the best of what the Sonic franchise has to offer, including the a troop of extremely talented musicians, artists and voice actors presented in an incredibly well executed evening. Sonic Boom (the show, the 5th Sonic the Hedgehog TV series to date) is currently airing State-side entertaining kids young and old alike with its unique brand of slapstick sitcom comedy, packaged snuggly into accessible, digestible episodes. But while two Booms seem to have won over the fans, the third, Sonic Boom: Rise of Lyric for the Nintendo Wii U, is most certainly not – and it doesn’t take much searching to find there is a rather polarised, negative opinion of the game.

The game’s origin is unusual in that it is rather Inception-esque: a spin-off game from a TV show, which in itself inspired by the Sonic the Hedgehog series. If SB:RoL were to be purely judged as a tie-in with a TV show, it could be taken as a typical endeavour designed purely to reinforce sales of merchandise.

Unfortunately, SB:RoL doesn’t get off the hook that easily for several reasons; most notably, the Big Red Button brand bred high expectations with many fans for a full and thorough development of something potentially fresh and exciting. It seems like cracks in the game began to manifest fairly early on, likely compounded by the en-mass exodus of staff from the developer. Furthermore, the herculean marketing drive for the game across the many months led many to believe that something special was in the pipeline, myself included. This was further reinforced by the waves of concept art and character designs which came cascading out from official releases; peaks at lush, organic environments and teasers of gargantuan mechanical leviathans confronting our heroes was more than sufficient to induce salivation from a large fraction of the fan base.

So what, in the end, did Sonic Boom: Rise of Lyric deliver? The premise is something like this: Sonic and his friends accidentally awaken Lyric, a biomechanical snake with a penchant for destruction, and it is up to the heroes to collect crystals in order to prevent him from eradicating life from the planet. The game takes a triple threat format of speed, puzzle-solving and exploration stages, interspersed with arenas where the player does battle with an onslaught of cybernetic creations.

The game commences with an apparently arbitrary flash-forward before switching to a brief encounter with Eggman and Metal Sonic, after which the player is dropped into the world and SB:RoL begins to show it’s true colours. The bulk of the game consists of navigating through a number of linear dungeons lying off a main hub world. From the get go it becomes strikingly obvious that the sheer scale of ambition in this title has been its demise, resulting in a lack of focus on any element of gameplay. Speed sections, at full pace, give the players few chances to react properly to any obstacles; bizarrely you can also slow to a snail’s pace with virtually no consequence, other than to prolong the experience. Sections involving combat require little to no skill or tactics, and can be completed successfully with the age old art of button bashing. Additionally, there is no consequence in running out of rings as death simply results in an instant respawn, meaning players can operate with near immunity throughout. From start to finish puzzles lack variety or originality and will fail to challenge even the youngest players, and although some differential is offered through each of the characters wielding their own unique abilities, most areas can be navigated regardless of character selected, rendering differences in skill sets as arbitrary and pointless on the most part.

Contrary to what some of the early screens indicated, the worlds of SB:RoL feel empty and flat – almost reminiscent of a past generation game that might have been expected from a title released ten or even fifteen years ago. The sparseness of the realm is baffling as the characters can only saunter along at a leisurely jog (ironically unless you are on water) requiring the player to traverse vast distances to get to and from areas and characters of interest. A number of optional quests delegated by supporting characters fail to provide any unique gaming experience, with the rewards providing no noticeable benefit gameplay whatsoever. What’s more are the numbers of objects dotted around such as crowns and “shinies”, which seem to serve no purpose other than to be sought after by completionists. Fortunately, only one game-breaking bug was encountered in the play through, but demonstrates a distinct lack of any comprehensive QA tests having been carried out.

The story is inconsequential and predictable on the most part, and includes two completely inexplicable encounters with Shadow, the inclusion of which can only really be explained away as fan service. The dialogue in the game is probably one of the highlights, with Mike Pollock once again stealing the show as the voice of Dr Eggman. However, amongst the fleeting moments of humour are the endless cycles of character soundbytes that remind the player repeatedly of the obvious (e.g. ramps can be used as ramps), over and over again.

Needless to say the overall state of Sonic Boom: Rise of Lyric is disappointing, but the problem with this title, and the continuing problem with modern Sonic games, is much more deep-seated. SEGA has in recent years felt the need to perpetually reinvent Sonic in aid of keeping the franchise fresh to younger audiences. While the redesign of Sonic and fellow protagonists are probably subjective and down to personal preference (and although they are not ‘canon’ could be argued as uncalled for anyway), the deviation from what makes Sonic games so special is where these modern Sonic titles fail. The Sonic games that fans fell in love with back in the nineties won over flocks of gamers because of their originality, their pace, their music and the worlds they painted – it was because of this revolutionary take on the platformer that Sonic became immortalised as videogame legend. While other successful franchises, such as Mario, continue to grow and evolve with ever increasing computational capabilities, we’d have expected Sonic to do similarly. But while Mario retains a familiar identity (characters, themes) and first and foremost its high-calibre of gameplay, Sonic games of recent have futilely attempted to mimic the architecture of others; one recent exception is Sonic Generations, a title that retained the core of what constituted as quintessential Sonic gameplay, and succeeded because of this.

The other great successes of recent have also been the fantastic revampings of classic titles for iOS by Taxman and Stealth – two veterans of the Sonic community. While the success of these titles will have been partially due to the capitalisation on nostalgia, you can ask any die-hard Sonic fan about these versions and they will tell you they aren’t the original game – they are loving restorations, painstakingly tweaked with additions that have breathed more beauty into what were already masterpieces. This duo are already demonstrating they can do the same with Sonic & Knuckles, and we can only hope that this title will get a similar official release. If I was in the shoes of those responsible for mobile gaming at SEGA, I’d be asking these guys to build a whole new game with a neo-retro look around the old engine; retro sells. 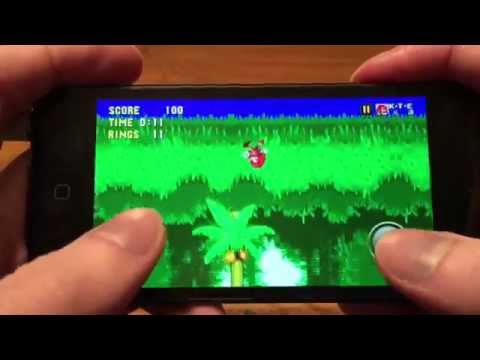 From a consumer perspective some of these moves made with Sonic Boom seem logical, and perhaps, as stated before, this game should only be regarded as a spin-off – but from a fan perspective there is a great fear that Sonic is or has mutated into nothing more than the face for market products with, as opposed to a high-calibre game series lovingly constructed by an enthusiastic and capable ensemble and equally loved by those who play them. I hope that the overwhelming opinion on this title will be observed by the powers that be, and that the criticisms, or perhaps even the suggests from the fans and reviewers alike are heeded. I, like many others, am extremely passionate about the Sonic universe – and we want to see great games created.

I’m still ever hopeful that Sonic will return to form very soon, and I certainly hope by the time my 40th rolls around that the Sonic franchise will have found its stride again. In the meantime, the show must go on.