To be honest, if it wasn’t for Barry’s Weekly five list on Segabits, I probably wouldn’t have been inspired to do my own Sonic List column. Seeing how people comment and react to my opinions gives me a great feeling of pride (and sometimes shame). The first time I did one of these columns and saw all the replies, good or bad, it was one of my favorite Sonic related moments. That’s what today’s column is all about. My favorite moments in Sonic-dom. Weather it’s from a game, a cartoon or just part of my life. These are the moments that I remember back with great fondness. Click below and enjoy! 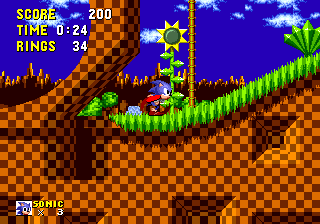 I don’t remember exactly when I bought the first Sonic the Hedgehog, but I do remember buying my Genesis used before the release of the game.  It came with boring-ass Altered Beast and the more fun Golden Axe. I do remember buying it in anticipation of Sonic the Hedgehog. I’d been reading up on the game in the greatest magazine of all time, Electronic Gaming monthly. This was an era when we got our info from magazines like this and Sega Visions and the internet was barely a thing yet. I remember getting Sonic 1 not necessarily on launch day, but around the summer of that year if I remember correctly. Of course, I unwrapped the game and read through the instructions in the back car seat while my mom drove home. I plugged the game into my Genesis and turned it on to hear that loud SEGAAAAAAA!! It was glorious. Then, there was Sonic. Wagging his little finger at me waiting for me to press start. When I first entered the world, I thought it was just okay.  The graphics were good and the music was great, but it still reminded me of a Mario clone. Then, I went full speed. Rolling down a hill as I spun into some enemies smashed into a looping tunnel and got shot out the other end far into the sky! I was amazed. Then, I got into a speed run where I ran so fast I couldn’t see Sonic on the screen anymore. He was so fast that the screen couldn’t keep up with him. That’s when I knew Sega was up to something incredible and I was a Sonic fan from that day on.

Getting up early to watch Sonic SATAM

I remember setting my alarm clock early on Saturday mornings at about 6:55 AM just to watch my favorite cartoon show curled up in bed and maybe go back to sleep for a few more hours. Sonic SATAM was worth losing sleep for. Far different in tone from it’s silly, weekday counterpart, SATAM was much more dark. Instead of Dr. Robotnik TRYING to take over the world only to be thwarted time and again by Sonic, he had already taken over the world and polluted the hell out of it. Every victory against Robotnik was minor at best. It made you care about the characters because their plight was so tough. Tails was actually treated like a six-year old instead of a sidekick going on dangerous adventures.  Robotnik (voiced by Jim Cummings) was not some silly man child, but a deadly threat who may not even be human. It was cute characters in a dark sci-fi setting. Like Bambi meets Star Wars. There was a few things I didn’t care for. Antoine was more annoying than good comic relief. He was even a good romantic foil for Sonic since it was pretty dang obvious Sally liked Sonic over him. That’s another thing, if you’re gonna have a “will they, won’t they?” romantic subplot, it might be a good idea not to have the two characters having a heavy kissing contest and still act like their platonic. (I must’ve missed that episode of “Sonic says” where Sonic said it was okay to make out with a girl and still be in the friend zone.) Also, the first half of the second season had some horrible mini-episodes.

The opening to Sonic Unleashed

[youtube]https://www.youtube.com/watch?v=P92wur4qBqc[/youtube] I absolutely LOVE this intro. I could watch it again and again. I think I watched it three times before actually starting the game itself! It was a glorious way to start off what I think was a pretty great game. (I know, I know. It’s a personal fave okay?) Marza animation put out all the stops for this glorious, six-minute entry. It had Sonic blasting through bots, speeding along super fast and kicking Eggman’s butt. The quality of the animation shown was spectacular and easily one of the greatest scenes in a Sonic game ever. I could go on and on, but click the video and see for yourself.

Of course I couldn’t forget Sonic Boom 2011. What was already one of the best E3’s I had was made even better thanks to Sonic Boom. The very first of these annual events, the first Sonic Boom celebrated the 20th anniversary of the blue blur. Working for two different Sega related sites, I was made a VIP member and was treated very well. I even watched some of the Crush 40 concert sitting next to Jim Sterling! However, there was a price for being VIP. I couldn’t for the life of me, leave to get to the main floor an mingle with the fans in attendance. (This was fixed the year after and VIP members could go in and out of the dance floor). Finally, I just took off my VIP badge and went in with everyone else. the atmosphere was incredible. Nothing but blue Sonic hats among the crowd, Crush 40 and Cash Cash playing together, a Sonic musical performance and tons of happy fans. I got to chill with Sven Joscelyne and Aaron Webber afterwards and a great time was had by all.

Back in September of 2013, a small group of Sonic fans made their own tiny Sonic get together called “Sonic Boom US West Chapter”. Spurned on by Sonic Boom leaving Southern California, it was a nice get together of Sonic fans and I got to make quite a few friends there. However, they had bigger plans in mind. They wanted a full blown fan-made Sonic Convention in So Cal. An “American Summer of Sonic” if you will and I wanted to be a part of it. In the end, my part was pretty small. I gave some ideas at our meetings (both in person and online) and hosted the trivia contest giving out cool prizes out of my own personal collection, but it felt great to help out and the event was a pretty big success. We had game music legend Tommy Tallarico, Sega’s own Arron Webber and Stephen Frost, Archie Comics Evan Stanley, rock group Serenity Seven and much more.  I can’t wait for next year.

Getting to meet the two biggest Sonic creatives at the same time. ‘Nuff said. Except why do I look like a fat Nostalgia Critic?

Apologies if the formatting seems a little off as this was originally going to go on Segabits as a cross promotion.