Here it is, everybody. The final page. Not much to really say about it, honestly, except that it’s probably one of my favorite pages Yardley! did. So I’ll end this feature with some talk about both ECC and Tracy Yardley!

Emerald Coast Comics is a web comic website, run mostly by people who aspire to become professionalism in the comic book industry. The comic projects on the site are used to give writers and artists a conduit through which to practice and hone their skills, as well as bring to life characters they’ve loved since they where children. Sonic Eggs isn’t the only comic on the site, and you are certainly welcome to check out a few of the others for yourself. ECC is a lot like SonicVerseTeam of old, except it does all of it’s comics in-house and has, over the years, developed stricter quality control measures to ensure most things on the website are a step up from your typical web comic fair, aside from a strip called Staffers, which is mostly used as practice for new artists.

We do occasionally give out commissions to smooth out the process, such was the case with Tracy Yardley! If you want to commission Tracy Yardley, whether it be a comic page, or just a damn cool piece of art, contact him on his DA. a penciled and inked piece will run you around $120, plus an additional $10 if you want him to send the picture to you. Yardley!’s time is precious, as being a comic book artist can be rather difficult to make a living off of. Keep in mind that he does this professionally and very well when you take the price into account.

Finally, I’d like to say that Yardley! is an absolute joy to work with. His e-mail correspondences where always fun and cheerful, he got each commission done promptly and quickly despite his busy schedule, and when he sent Jason the pages in the mail, he included a kind letter and some ashcan art books. Frankly, his personality and promptness alone was worth every penny.

So, without further ado, I bring you the conclusion to Tracy Yardley’s run on Sonic Eggs, colored by Jamie Lee. The story doesn’t end here, though. Check out ECC next Saturday for future Sonic Eggs pages, penciled and inked by ECC Staff member Kichi. If you want this comic featured regularly on the front page, let us  know. 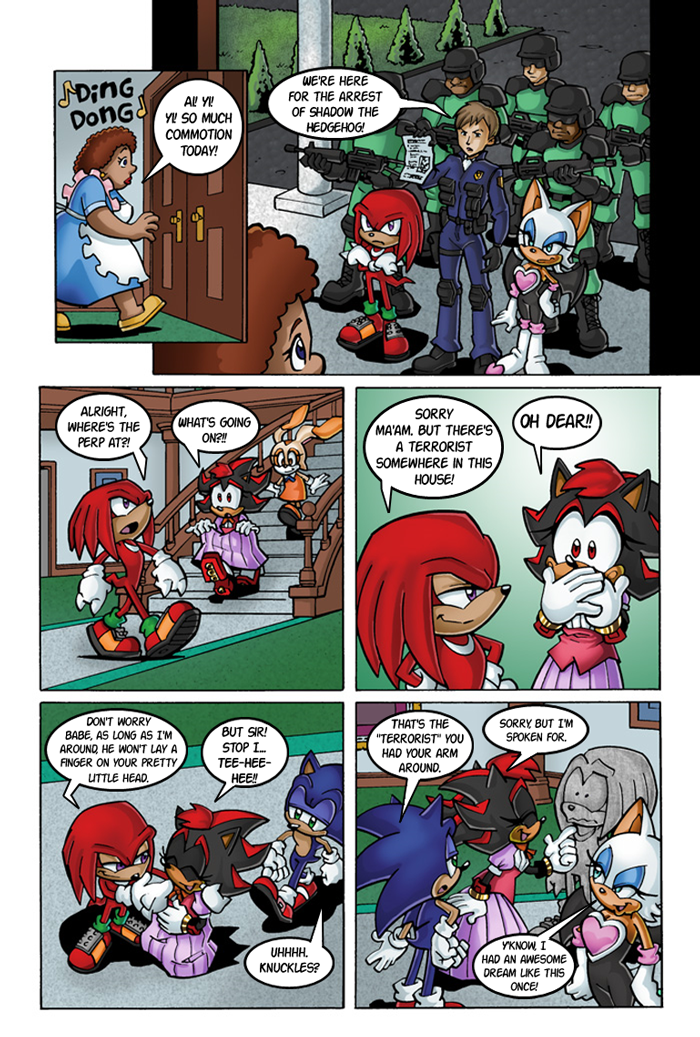