Everywhere you look, classic Sonic games are on things that go beep.  With the success of Sonic 1 Mobile, with its sales exceeding 8 million units, SEGA thought it would be a swell idea to port Sonic the Hedgehog 2 to mobile phones as well.  Since Sonic 2 is so damn big, it was released in two parts, Dash and Crash.  My mobile provider recently put up Crash, so I gave it a spin in order to make my intended Dash/Crash, 2-in-1 review.  The verdict?  It’s Sonic 2 and good.  Big surprise.  I’ll keep it brief, kids.

The notable thing about this port is that it is not a laughing stock, like Sonic 1 GBA. The game plays and runs just like we all remember.  The entire Sonic 2 experience is here in all of its glory with no corners cut.  The music is even better than Sonic 1 GBA.

Why do I keep referencing that turd version of Sonic 1, you ask?  Well, the GBA hardware is superior to that of most mobile phones and the fact (that’s right, I’m transcending opinion here) that both mobile ports of Sonic 1 and Sonic 2 are better than the GBA’s port is absolutely embarrassing to whatever hapless development team pulled a GBA cartridge out of its ass.  I could go on and on about how playing classic Sonic on your phone is more enjoyable than a device that is made for gaming, but you get the point.  Now, you could be inclined to disagree, as low end phones tend to lag when things get rather chaotic on screen, but I didn’t experience it.  My phone is awesome (double awesome for being free).  Thanks, LG. 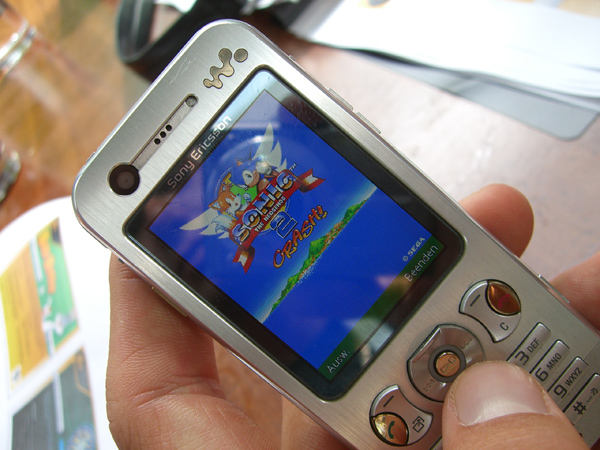 The drawbacks with this mobile port lie solely within the hardware department.  Depending on your mobile phone, controls range from serviceable to awkward.  Sonic 2 was made for a home console, so your thumbstick/keypad mileage may vary.  During hectic moments, it could be a problem to perform certain movements, but from my experience, controls are only a minor inconvenience.  Controls are left up to what device you have,  so I recommend checking the game’s manual for your model of mobile device to see if any awkwardness has the potential of ruining your experience.  The biggest problem with the port is the amount of room on screen.  During speedy moments, it’s near impossible to gauge what is in front of you.  I’ve memorized this game up and down from frequent play sessions and when I’m running into things, there is a problem.  I assume lag can be a problem on low-end phones, but I don’t own one.  Again, my phone is mad tight.

Flaws aside, these two games pack a huge punch when it comes to content.  When I just had Dash, the game already had more content than almost all mobile games out there.  Coupled with Crash, the game’s a mobile powerhouse.  You cannot get a better deal on playtime with Sonic 2 Dash & Crash on the market.

The decision lies upon your shoulders.  Do you really want another port of Sonic 2?  If you want a portable version of it and do not own a homebrew-enabled PSP or DS, then get Dash/Crash.  If you already have your portable, Sonic 2 fix, then these games are not for you.