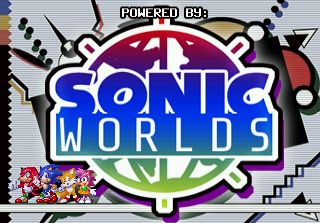 We have a community project over at Sonic Fan Games HQ that’s not a fangame, but rather, the essential tools for you to create your own.  Yeah, it’s something manageable and not a community game, which never see development past the first stage (if even that far).  Making an engine is one of the most tedious parts of the game creation process, especially with a Sonic game, so Worlds provides a pre-made engine with a basic set of objects and features in order to allow designers to mainly focus on level design. Due the collaborative nature of this project, everyone can freely use this pre-made engine, modify it and submit additions to the official releases to enhance the quality of the engine.  The engine is created in the Multimedia Fusion 2 software.

The engine has been used a countless number of times since its initial release in mid-2007.  It was debuted alongside the release of Sonic Nexus’ second demo at the 2007 Sonic Amateur Games Expo.  The engine has become incredibly popular for fangamers and you can see many YouTube videos whoring it out.  Yeah, the downside to a engine completed for the public is that there’s only about one good project for every dozen or so.  Still, when you get a good project, it is good.

Here is the entire list of improvements, with authors cited, to Sonic Worlds:

Ceiling Landing – If Sonic hits a curved ceiling at a high enough speed, he’ll “land” on it and continue run on it. (Damizean)
Peel Out – This has been set so only sonic can do this action (look in Actions [10] Peel Out) (APPO)
A save point – This saves all the data such as ring count, what shield you had etc.. so that at the beginning of the app if you press continue all of this will be loaded (AZU)
Checkpoints – Not the same as a save point as this only places sonic at the last checkpoint you ran through and doesn’t hold ring count, or what shied you had, just position (APPO)
Protection shield – Sonic can be hit a number of times before loosing his rings (AZU)
Magnetic shield – Rings are attracted to sonic when in frame also sonic does an extra jump if you press jump in the air again (NITEMARE & APPO)
Flame shield – Makes sonic immune to fire and also allows sonic to do a little dash forward if you press jump again while in the air (APPO)
Water shield – Stops sonic from drowning and does that bounce thing if you press jump again in the air (APPO)
Boost pads – gives sonic a boost as he runs over them (APPO)
Water slides – sonic slides down them (APPO)
Drowning – If sonic is underwater for to long the music will change and a warning will flash above sonic if he doesn’t manage to get air, sonic will drown (APPO)
Air bubbles (under water) – Gives sonic air if he’s drowning (APPO)
Water run – the ability to run on water at a fast speed (AZU & APPO)
Breakable Rockswall – When jumped on or rolled into destroy and produce

I hope you fangamers create a nice, solid product out of what is provided for you.  Study how these gimmicks and badniks are programmed so that you can create your own, thus making your game more original!

Click here to get the .mfa file of the latest Sonic Worlds build!

EDIT: Link updated to a site that didn’t exceed bandwidth!