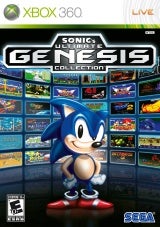 IGN has a preview of the upcoming (and umpteenth) compilation from SEGA, Sonic’s Ultimate Genesis Collection, up on its website.  Despite the game having the infamous “butt Sonic art,” the previewer, Ryan Clements, is all smiles about this upcoming batch of 40 Genesis tiles on one disc.

Ryan notes that the game features a filtering system in the game selection menu.  You can arrange the titles by genre or your personal rating, thus putting all of your favorite 16-bit adventures at the top of the list.  It looks to be yet another winner for SEGA, as it continues to rehash its back catalog until the end of time (and by back catalog, I mean Genesis games.  My homebrew-enabled Wii can’t emulate a Saturn, SEGA.  A little help here!)

Ryan does not touch upon the “hated” (I guess?) upscaling filter that makes all the games “HD.”  Don’t worry, because WorthPlaying.com has some “HD” screens of Sonic 2 and they are awful.  Let’s sneak a peak at the legendary special stage:

Aw, man, who wiped their nose with the Sonic screenshots again?  Wait, nobody did?  Well, shit.