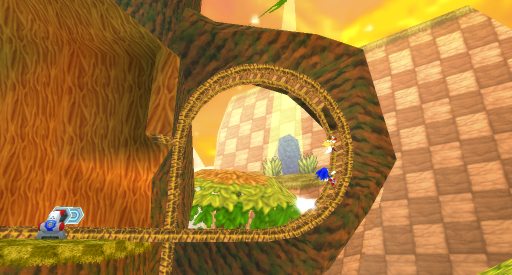 In response to Slingerland’s opening message of his first re-named Fanatics article, I agree that there has been gaps lately in articles published on this here front page. I’m normally known for posting loads of news here but news has been slow. So, I’m going to take a page out of Slingerland’s book and make a new on-going front page read called Fandemonium. Fandemonium will focus on all thing’s that make Sonic games and what makes them work, be it stages, characters, items, gameplay and design.

The topic can only be about Sonic games and can be anything from past, present and future Sonic games. I’ll be posting articles on all details and information regarding the topic at hand together with my own oppinion and experience. A topic will be made at the SSMB where you the fans can post your own oppinions on the topic at hand and suggest a topic for the next article, best posts will be mentioned on the front page in the Fandemonium Round-Up that will be featured with the next article where, as the title suggests I’ll give a round-up of fan oppinions on the last Fandemonium topic. One of my all-time favourite stages in Sonic history, Ice Paradise Zone from Sonic Advance 2 on GBA. I’ve always been a sucker for ice stages, but why? Well, they are designed for speed with all the slippery slides, slopes and snowy hills you can dash down.  Ice stages like Ice Paradise also tend to have some upbeat festive music in them too which only makes you want to run faster. Some ice stages see you snowboard at top speed down mountains, which adds something different to the game without losing what makes Sonic work – speed.

Here is a map of Ice Paradise from Sonic Center. If you take a look you will see it’s a treck down a snowy mountain with added Sonic favourites: loops, springs, poles and other things like icey slopes and slides which all keep you speeding along. Enemies are all themed well for the stage like the tummy sledding penguins, they are carefully placed and theres always a trick or two you can pull to destroy them without slowing down. It’s one of the best designed Sonic stages! The only thing I don’t understand is the background where there is a city with two beams of light moving side to side that can be distracting. What would a city be doing around a snowy mountain, unless it’s one of Eggmans bases?

Hand-held Sonic games have always kept to the classic formula for Sonic stages while adding some new tricks here and there. On hand-held consoles Sonic hasn’t failed with reviewers due to the fast-paced 2D gameplay mixed with tight controls and great frame-rate.

The age old favorite, Green Hill Zone is the best example here. This was the dogs b******s back when Sonic first arrived on everyone’s SEGA Mega Drive/Genesis and still is today to many fans. The things you find in the stages really got the adrenaline going, like the gravity defying loop de loops as seen in the screenshot above, or the twists and turns of the corkscrews and tunnels. The steep hills that lead to a ramp that launch you for miles also became a shock and awe favourite that dropped many a jaw. If you weren’t impressed by this in 1991, your day job must have been the role of a stunt devil. SEGA’s Mega Drive/Genesis Blast Processor really did Sonic justice in his first game.

Sonic Unleashed is the most recent of the 3D Sonic games. Sonic the Hedgehog’s daytime stages have been very well designed for speed thanks to the aid of the graphical power of the Hedgehog Engine. It’s this engine that keeps the frame-rate up with Sonic’s tremendous speed when boosting. Sonic’s extra tricks of drifting and side-stepping you never have to slow down.

The stages themselves are designed from real-world places which in theory don’t sound like they’d work too well in a Sonic game but the designers have managed to come up with a Sonic like stage filled with all the Sonic staples(e.g. Springs, dash-pads, rails etc…) for many areas around the world and still keep the look of the original cities, villages etc…

Sonic and the Black Knight for Nintendo Wii is the next Sonic game to come, no other game than that is known about right now. We haven’t seen much in the way of stages for Black Knight but from what we have seen we have some very dull and grey looking castle/town areas but on the other hand we have some beautiful looking grassy field areas as seen in the above screenshot. If we can run around really fast in those field areas then I personally will ignore all tasks I’m supposed to be doing and just go dash around the field for a while and enjoy the view. This game looks set to prove what the Wii can do graphically, if only for the field areas.

What are your oppinions on the stages across all Sonic games, hand-held and console, past, present and future? What makes a stage in a Sonic game in your eyes?

Don’t forget to let us know there what topic you would like to see in the next Fandemonium article and best posts will appear on the front page in the round-up.