Time Twisted and I have a history together. The game debuted during the same SAGE as my project and we have made an appearance at the show for three years running now. It is always a good sight to see that a project is still alive. Secondly, we both chose the path of emulating Sonic CD, which is a plus, in my book. It remains a highlight of the show for anybody looking for a demo with more content than most (three zones here, broskis). Nonetheless, personally, I am gradually more and more disappointed with each subsequent release.

When it came down to gameplay, the physics are similar to Sonic Panic, in that they are manageable and are not intrusive to the action. A much needed improvement that I noticed this year was the beefed-up spin-dash. It only takes one touch of the space bar to power up Sonic to full speed and that is a godsend, in my opinion. The core gameplay experience does not twist the fun, but there are a few questionable gameplay choices that will. For example, ring loss is, apparently, absent. Sure, it happens, but I cannot collect any rings. None.

Time Twisted, as stated earlier, takes after Sonic CD and its time travel element. In previous years, I did not think there was a reason for the time travel, as Overbound, the creator, might not have thought of a purpose for it at the time. That said, now that development is three years in, there should be a reason why I should even bother going back to the past. I had to destroy something in the past levels of Sonic CD, so there was a reward for keeping my speed up in the present. Here, I am simply unmotivated to brave the journey through time. Time Twisted treats this feature like a novelty and it feels phoned in for the sake of having time travel while other fangames do not.

Now, to bring up the topic of “motivation” once more to discuss the level design. The level design just does not flow enough to allow me to keep my momentum up to allow time travel, with Sonic getting nailed by a poorly placed badnik, wall, or loop (which causes deceleration and City Edge has lots of loops). That said, when it does allow me to, I do not want to time travel. Most of the time, I ended up time traveling during the straightaways at the end of the level after failing to do so the entire time. If the levels were a tad more open, as they feel confined right now, I think it would allow for greater use of the time travel feature. Perplex Puzzle is probably the most guilty of a claustrophobic feel and it was hard to get anything going. That, and I noticed a distinct lack of water physics.

Now, onto the new content, Majestic Mine. What an aggravating level it is to play. The first thing 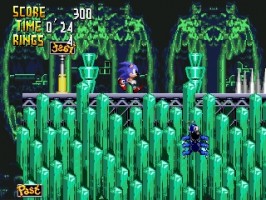 you will be confronted with is a blue badnik on green foreground. There is not enough contrast to notice the badnik and it will probably slap players upside the head on more than one occasion. Second, the badnik that shoots you with laser-beam eyes will hit you before you even see it on screen. Finally, the level lets you build up speed, only for it to send you careening into rotating spike balls or more contrast-less/laser-shooting badniks. These three things happen way too often and I made it to the end of the zone after dying about 10 times.

The aspect bringing any redeeming quality to the game is the use of level-specific gimmicks and the graphics. There are a few objects to interact in Majestic Mine and Perplex Puzzle and they add a spark of personality to each level. Graphically, Perplex Puzzle takes the prize for having the most foreground variety, but it was not that hard. The other two, for a large majority, just repeat the same tile over and over again. To close out the graphics discussion, there is no parallax whatsoever, resulting in a static scene.

In the sound department, there is only one key annoyance: Sonic landing. Sonic has to jump…a lot. To hear a click with every return to solid ground is, quite frankly, the most irritating part of the demo. Clicking aside, sound effects are fine. Musically, the zone themes sample from rock and roll tunes, so there is a common theme in that department. However, the Sonic CD invincibility, super shoe, and end level themes utilized are considerably louder than the zone themes, so some leveling out is in order. Majestic Mine’s theme sounds low quality, too.

In short, Time Twisted takes a step backwards with each zone. City Edge has been bearable for two years now, but Perplex Puzzle and Majestic Mine just are there to gradually frustrate you more. Badnik placement is at Terror Alert Level Red and the foregrounds need some sort of spark to keep them interesting. It is fantastic that there is more content than most other fangames, but when the quality is this flawed, the quantity becomes a moot point. Hopefully, the game can get its act together before its next release, or else the project will become a thing of the past.