The site features its own Sonic Rivals page, and although that offers no new information, if you navigate to the Vancouver studios blog entry, studio head Joe Bonar reveals that the game will be running on the internally developed Reaper Engine.

This Tokyo based studio currently employs 10 members of staff which it aims to increase to 50, and it derives 10,000,000 Yen of its venture capital from the SEGA Corporation, which unsurprisingly is its main employer. However what is surprising is the studios current decision to support the Playstation 3, XBOX 360, and Wii formats only, omitting developments on Sony’s Playstation Portable, the Nintendo Gameboy Advance and DS, while the studio remained undecided on its support for the PC and Mobile Phone. 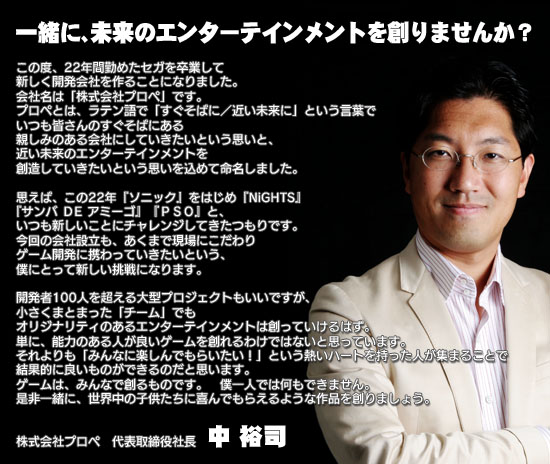 In a question and answer conducted with a studio official it was stated that Prope would create and explore the possibilities of both 3D and 2D visuals in its games, but that Sonic would play no part in the studios developments.